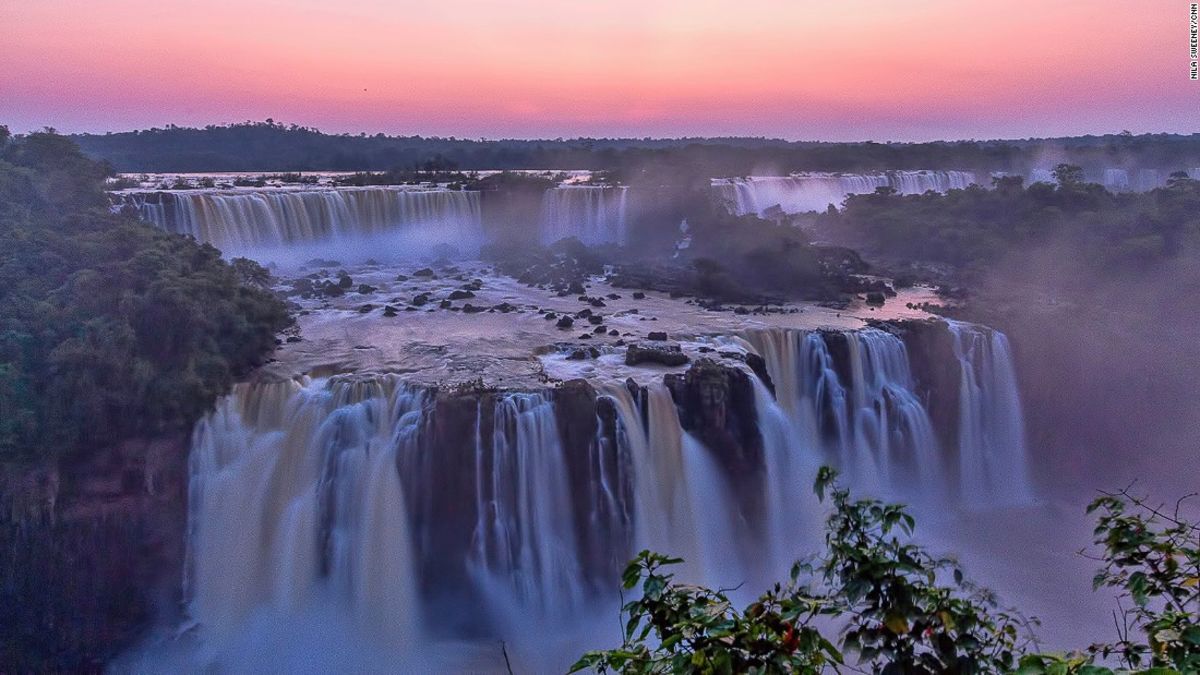 But you probably still have no idea what to expect when you come face to face with the almighty Iguazu Falls, on the border of the Argentina province of Misiones and the Brazilian state of Parana.

Unlike overhyped destinations that can leave you feeling disappointed, Iguazu Falls instantly turns even jaded travelers into a raving fan.

Judging by the sheer number of visitors — more than one million a year — its pulling power is showing no sign of weakening.

‘Unlike any other waterfall on Earth’

Spanning 2.7 kilometers, Iguazu Falls is made of 275 waterfalls or cataracts.

To describe the Iguazu Falls without gushing superlatives is a futile exercise. With water cascades as far as the eye can see — some massive and powerful, some small and dainty — the Iguazu Falls are a shock to the system.

Even the late U.S. first lady Eleanor Roosevelt was reportedly so impressed when she saw them that she purportedly said “Poor Niagara.””Iguazu Falls always catches you by surprise,” says Martin Ruffo, Intrepid Travel’s regional product manager for Latin America. “They’re truly a magnificent display of nature. Their size and scale are unlike any other waterfall on Earth.”

That’s no exaggeration. By any measure, Iguazu Falls is a monster.

It’s made up of a system of 275 waterfalls or cataracts, with the exact number depending on the season. It spans an area 2.7 kilometers wide.

The tallest of these waterfalls, called the Devil’s Throat, drops by more than 80 meters into a milky abyss that creates a permanent cloud of mist.

To put that in perspective, Iguazu Falls is nearly twice as tall as Niagara Falls and rivaled only by Zambia and Zimbabwe’s Victoria Falls, which is taller at 108 meters.

The amount of water pouring from these falls to the Iguazu River is equally staggering. On average, about 1,500 cubic meters of water flows every second. Depending on the time of the year, the rate of water flow can be as much as 13,000 cubic meters per second — enough to fill five Olympic swimming pools — especially during the rainy months of November to March.

It’s little surprise then that the river that the water flows into, as well as the waterfalls, are both named Iguazu, which literally means “big water” in native Guarani Indian language.

Straddling the border of Argentina and Brazil, Iguazu Falls became a UNESCO World Heritage Site in 1984.

In 2011, it was selected as one of the winners of the New Seven Wonders of Nature competition. It’s easy to see why it’s piling up awards and accolades.

It’s located within one of the few remaining inland rainforests in South America, the Atlantic rainforest, which has been wisely preserved by both Argentina and Brazil. The lush, subtropical national parks surrounding it are teeming with wildlife. This is a haven for more than 2,000 plant species, about 400 bird species, 80 types of mammals and countless insects and invertebrate species.

According to local tour guide Francis Almeida Barros, it’s not uncommon here to encounter colorful toucans, monkeys and even jaguars on the way to the waterfalls.

This jungle experience, albeit briefly, sets Iguazu Falls apart from its more popular global rival. Unlike Niagara Falls, which is surrounded by development such as casinos, a revolving restaurant and Starbucks, Iguazu Falls is pure nature.

For many visitors, the first glimpse of Iguazu Falls is an emotional experience. But it pales in comparison to getting up close to the falls.

The Argentinean side offers this experience with a walking route along a series of rustic-looking boardwalks that take visitors close to the action. With around two-thirds of the waterfalls located here, there’s plenty of opportunity to get intimate with the falls and get soaked in the process.

Most people head straight to the main attraction, that being the Devil’s Throat (Garganta del Diablo in Spanish). Shaped like a horseshoe, the Devil’s Throat is the largest water curtain in the whole system and includes 14 waterfalls.

It’s possible to take a speedboat to the falls, but be prepared to get really wet as these boats take you right under the falls. You could easily spend the whole day exploring this side of the waterfalls without even noticing time passing.

After getting soaked, the Brazilian side of the falls offer a more sedate but equally gratifying view.

While you don’t get as close to the falls, the Brazilian side offers incredible panoramic views that help deepen an appreciation for their grandeur.

Iguazu’s remote location makes flying the most practical way of getting here.

From Buenos Aires, it’s a 90-minute flight to Puerto Iguazu in the Argentinean side. From Rio de Janeiro, it takes two hours to fly to the Brazilian town of Foz de Iguacu.

Most tourists stay in either town when visiting Iguazu Falls. Both offer ample dining and hotel options for every type of traveler. They’re also relatively close to the falls — about 12 kilometers away. Here are two of the hotels that offer the best views of the falls on both sides: